Catalyst was a thunderclap of inspiration 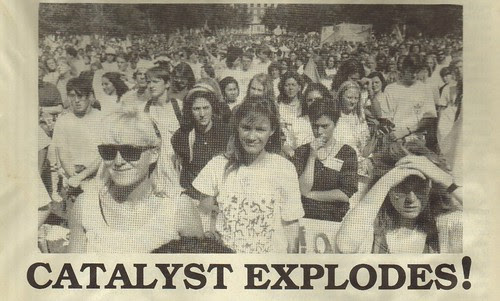 Maybe it was the realization that the fate of the environment is becoming more dire with each passing semester. Perhaps the promise of burgeoning campus political action after two decades of apathy enticed them. The lure of Robert Redford, Billy Bragg and Jesse Jackson may have had something to do with it.

Whatever the reason, 7,600 students converged on the University of Illinois in Champaign-Urbana in October for the Student Environment Action Coalition's (SEAC) national conference, more than doubling even the most optimistic forecasts of its organizers and quadrupling the impressive attendance at the group's first conference the year before. Dubbed Catalyst, the three-day conference drew students from 1,100 schools in all 50 states and 11 countries.

Catalyst focused on organizing skills and networking among students, including an ambitious array of workshops, ranging from the basics of campaign planning to an introduction to environment justice.

"It was a thunderclap of inspiration," says Ericka Kurz, SEAC's national campaign coordinator. David Ball, SEAC's co-coordinator, adds "Catalyst has given us a ton of momentum."

Not that the movement had been exactly snail-paced before Catalyst. Founded with 200 students in 1988 after two University of North Carolina students placed an ad in Greenpeace Magazine, SEAC now boasts supporters from nearly every college campus in the country. The group recently moved its national office from a cubby hole in the University of North Carolina's student union to a rented office suite in Chapel Hill. In the last year, SEAC has hired five full-time employees and organized a national council with representatives from 17 districts around the country.

While encouraged by the sheer numbers that turned out for Catalyst, some student leaders are hesitant to call the conference an unqualified success. The big-name headliners overshadowed student networking, and a portion of the interest could be attributed to the "Grateful Dead effect" of students showing up primarily for the music and atmosphere, says Eric O'Dell, editor of SEAC's newsletter, The Network News.

SEAC is now broadening its work by tying the social justice issues of race, poverty and peace to the environment. At Catalyst, much of the discussion focused on building diversity within the movement, and SEAC plans to establish an advisory board that cuts across the lines of race, gender and sexual orientation.

SEAC also launched an on-going corporate accountability campaign on campuses across the country in November. Activities range from demanding environmentally sound university investments to protesting employment recruitment by Mobil. In an effort to draw attention to the connection between the nation's energy policy and the continuing military escalation in the Persian Gulf, students at Texas A & M University organized what may have been the first protest ever at the university, says SEAC member Lara Mears.

"A & M is notorious for non-activism. I was very encouraged that people are taking the time to get involved and to talk about the issues," says Mears of the 200 students who attended the rally.

Meanwhile, some national environmental leaders are applauding the waning of campus apathy. Denis Hayes, who heads the Green Seal labeling program and organized Earth Day campaigns in both 1970 and 1990, says that his environmental lectures on campuses a few years ago drew only 50 to 60 students even at the biggest schools. Now the lecture halls are routinely filled to overflowing. And unlike their peers a generation ago, today's campus activists have a more sophisticated understanding of the science and politics behind the issues, Hayes says.

"I think it is healthy for any social movement to have a strong youth component," he says. "The students are often the folks who arrive at the scene with a passion and state the issue in terms that demand action.

PHOTO (BLACK & WHITE): Nearly 7,600 students converged on the University of Illinois for the SEAC conference.